Learn how to play Crazy Eight, one of the most popular card games around. Played by friends, families, teenagers, youth groups and kids everywhere. Why? It is SO MUCH FUN, played with a regular deck of cards, it is one of those games that are super easy to learn but super hard to put down. 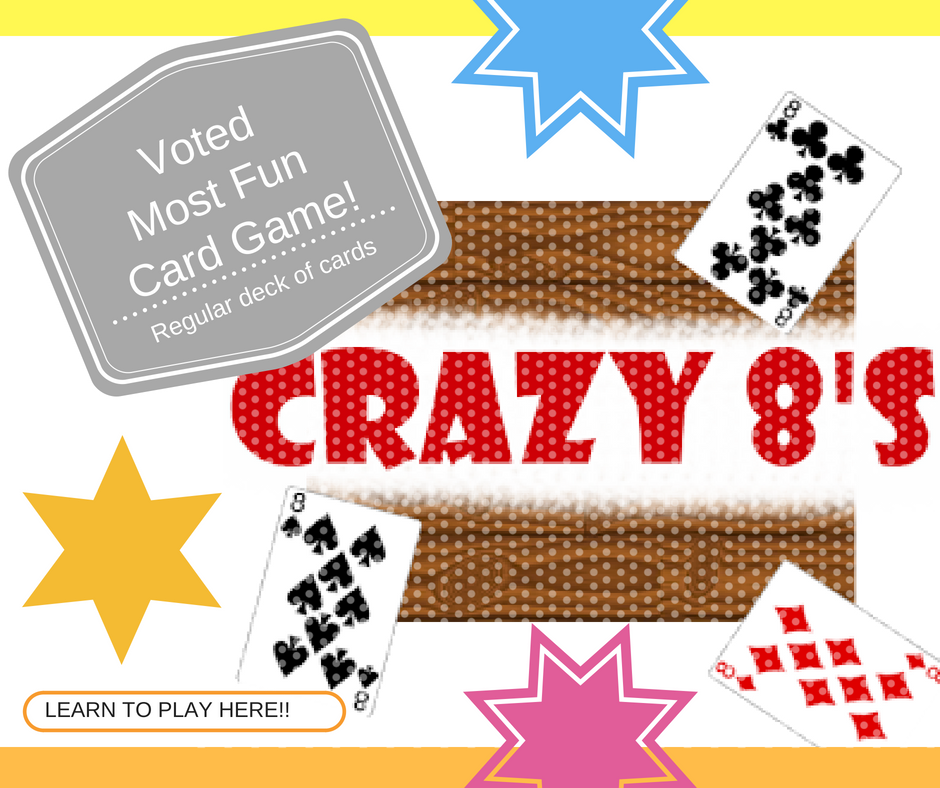 HOW TO PLAY CRAZY EIGHT

The easiest way to learn this game is to read through the rules, start playing and take the learn-as-you-go approach.

YOU HAVE TWO OPTIONS AS THE NEXT PLAYER:


a) Play a card with a similar number or suite face-up that match the last card on the discard pile.


b) If you don’t have a card to play, you forfeit your chance to put a card down and pick a card up from the pick-up pile, even if the card you pick up match, you are not allowed to put it down in this round.


The card on top of the discard pile is a King of Hearts you can either play another King or any Heart.

THERE ARE A FEW WILD CARDS:


The Crazy EIGHT – The number 8 card of any suite can be played on top of any card to skip the next player.

The JOKER – The next player must pick up 4 cards and the player who puts this card down can change the suit. Another Joker – same rules apply as with the number 2 card.

The JACK - If you hold one of these cards, when it is your turn, you may play this card on top of any other card and change the suite. If the current suite is hearts, you can choose to change it to spades, diamonds or clubs. The next player can now play any card of the suit you have nominated or he can play another eight and change the suit to any suit he wishes.

TO SUM UP IN SHORT:


When it’s your turn, you play the same number or suit as per the card on top of the discard pile. If you choose, you can play any of the following cards on top of any other card and the following happens:

If the first opening card is any of the above wild cards, the same rules apply for the player that must play first.

HOW DO YOU WIN?


You must be the first to get rid of all the cards in your hand!

But beware: The moment you put your second last card down and you have only one card left in your hand, you must shout “CRAZY”! If you don’t and any other player notice, they can order you to pick up another card!

The aim is to keep your score down as low as possible as different rounds are played!

The rest of the players add their scores up as follow according to the cards held in their hand:

All other cards are scored according to the number on the card.

HAVE FUN with Crazy Eight!

That you can COLLECT PLAYING CARDS and that there are literally hundreds and hundreds of different types of playing cards to collect. From Hi-tech glow in the dark to Vintage Playing Cards! Check it all out here!

THE ORIGINAL UNO GAME BY MATEL

Don’t forget to check out all the other NEW UNO GAMES as well as THE LATEST TOP SELLING CARD GAMES! They are all a blast, very popular and HIGHLY rated!

TAKE A LOOK - ALL THE NEW UNO GAMES - CLICK HERE!

ALL NEW UNO GAMES - WHAT A BLAST!

We hope you enjoyed the Crazy Eight Game. For more fun games, follow us on social media!

Return to Fun Stuff To Do:  HOME PAGE